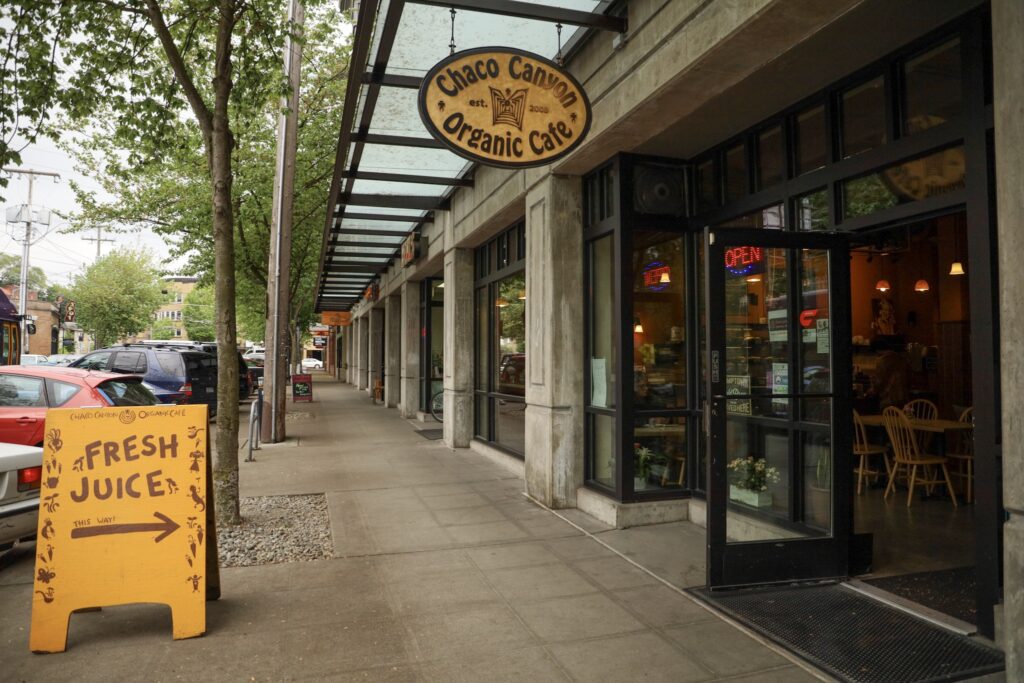 Chaco Canyon Organic Cafe serves an entirely vegan menu. This vegan restaurant in Seattle has three locations: Greenwood, West Seattle, and Queen Anne. In this conversation with the Greenwood kitchen manager, Careth Wilkinson-Davis, we learn about the business’s growth over the years and creative ways to reduce waste in a restaurant. 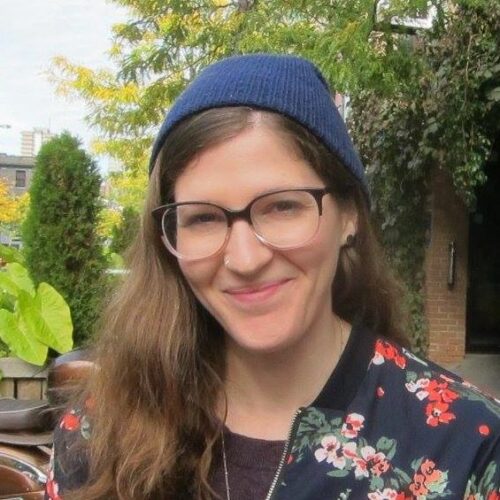 Can you tell me a little bit about yourself and a brief history of Chaco Canyon?

Careth: I’ve been with Chaco Canyon for about two years. My restaurant experience before was with vegetarian and vegan food, but this is my first time doing a completely vegan menu. What drew me to Chaco Canyon was their focus on sustainability. Part of the reason why they were a vegan cafe in the first place was because of the positive environmental impact. As soon as I started, I knew that they were doing things a little differently in that they were really intentional about how they sorted compost, recycling, trash, and bought everything in bulk as much as possible.

The first Chaco opened in 2003. They started in a tiny location and grew from there. One of the biggest locations they had was in the University District. That’s the one a lot of people knew for a really long time. It’s now closed, but we currently have three locations. Queen Anne is our newest one which opened in January of this year. We also have locations in West Seattle and Greenwood which is the one I work at with our central kitchen.

The original owner and founder was Chris Maykut. Now, it’s owned by Mohamed Yousef. Mohamed is a long-time member of the Seattle community and has been in the food industry a long time. He’s originally from Egypt and immigrated when he was pretty young. Chris is still involved as a part owner and consultant, so he’s still around.

Chaco Canyon was a certified organic cafe at one point, but they moved away from that because of some of the costs and extra waste involved in that. They had to package everything very separately in plastic wrap to make sure there was no potential for something non-organic to be in any of the food. 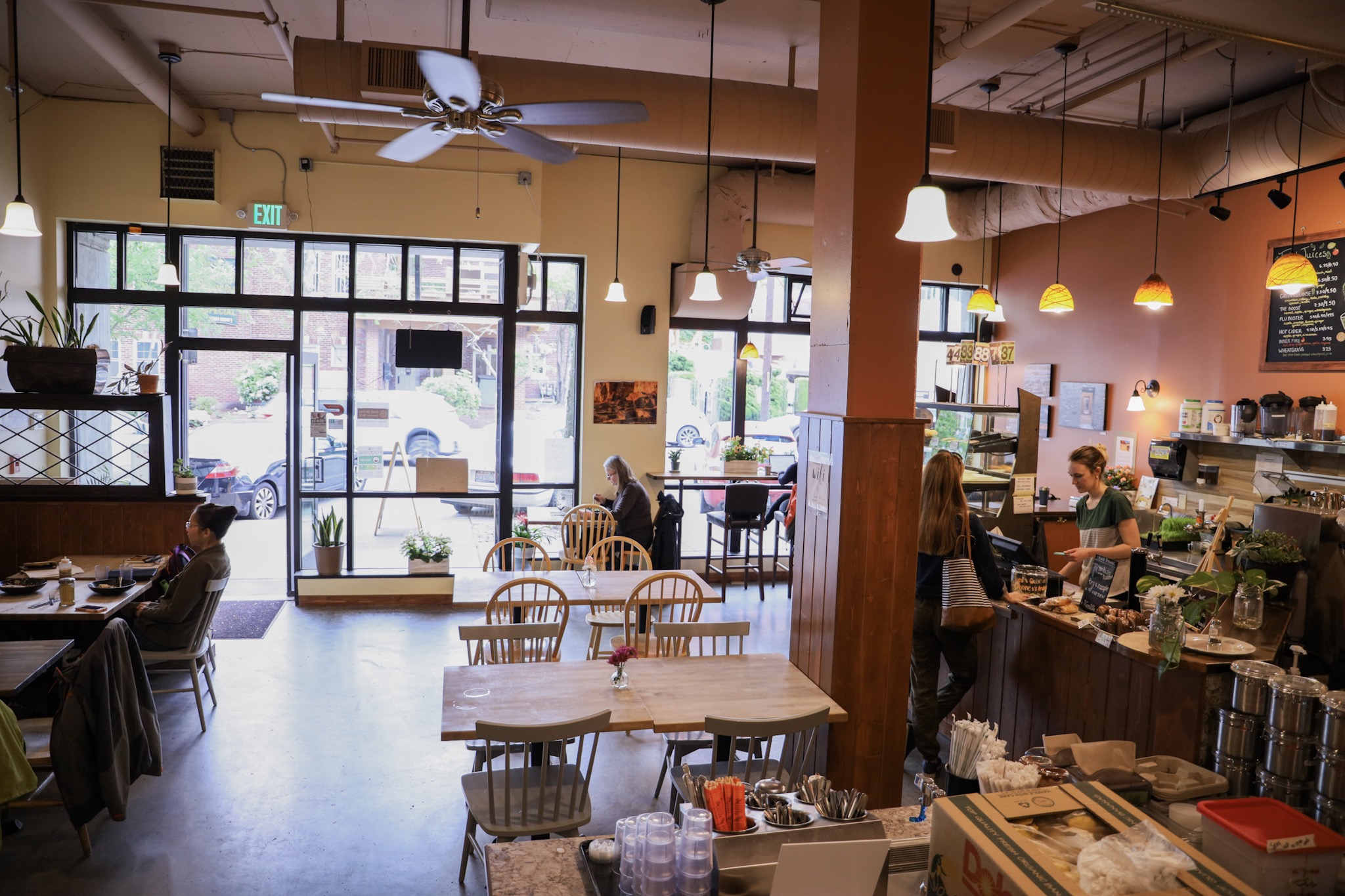 What are some ways Chaco Canyon has been able to reduce waste?

Careth: Two of the main things that has allowed us to divert more waste from the landfill is by being thorough about training staff and having a different system of trash for customers. Instead of having large trash bins that create an opportunity for customers to make mistakes with how they’re sorting recycling and trash, we have shallow bins with no liners that the waiter staff sorts more thoroughly. That was something very unique that I haven’t seen any other place doing which is how we make sure that the trash is actually going where it should and the recycling can get properly recycled.

We’ve had quite a few creative ways to divert waste from the landfill. For a while, Chaco Canyon sold their food waste that was still able to be used to local farmers to feed their pigs. At another point, we were giving our oil waste to someone who had a bio-diesel converted car.

We get most of our plates, bowls, cups, and mugs from Goodwill instead of buying new. We also do that with furniture as much as possible. I just recently I went to Goodwill and got some chairs that we needed.

We’ve also chosen not give out any disposable utensils, even if they’re compostable. We find that the cost was high and if they’re not composted correctly, they could still end up in water sources. Compostable utensils don’t break down in nature, especially not in salt water. Our policy is to let people borrow our silverware and then return it if they can. We’ve just made that commitment to reduce the single-use waste. We also continue to try to find ways to encourage staff and customers to avoid single-use items and use durables. We love when customers eat in-house when they can. 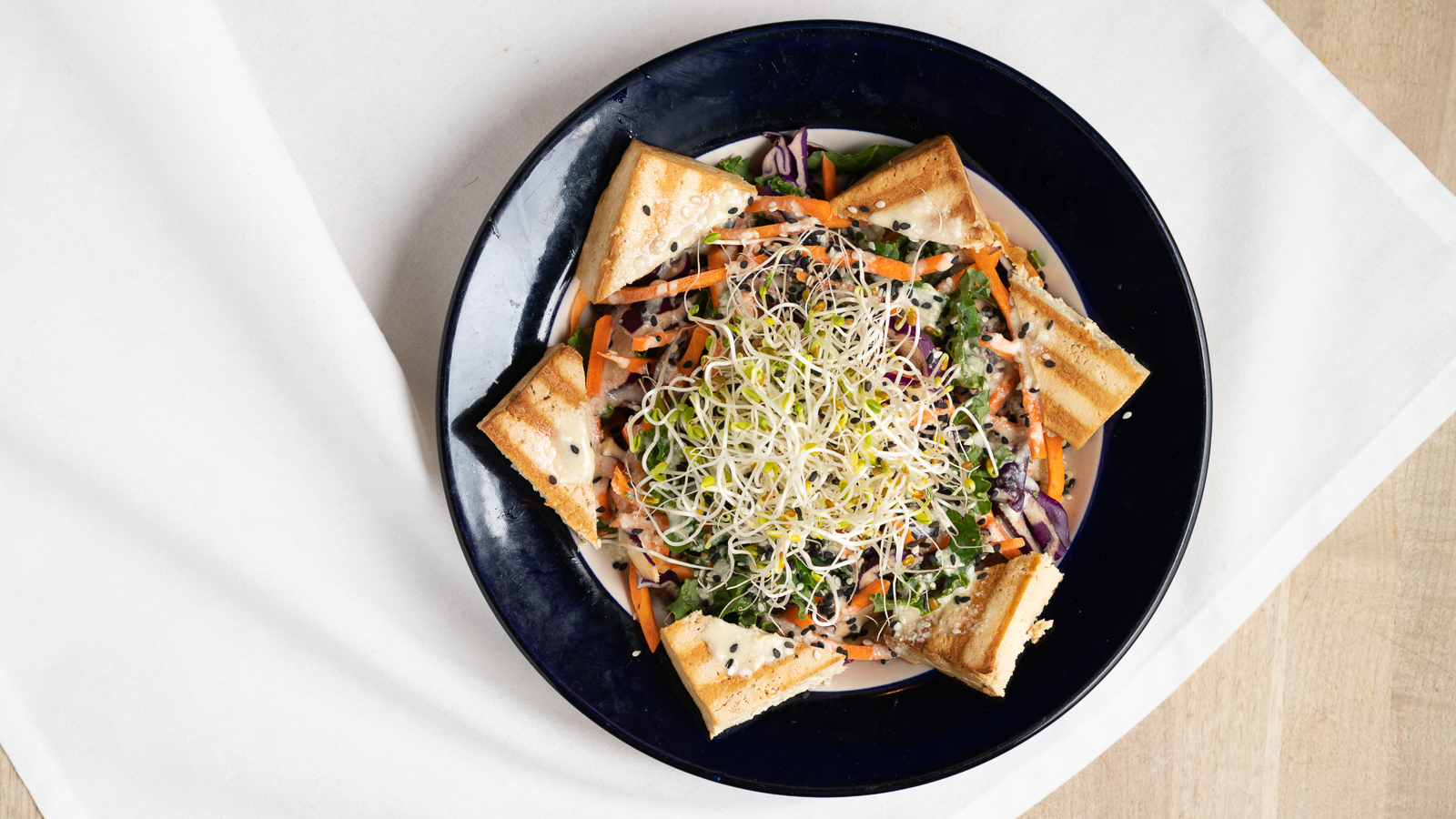 My last question for you is, what is your favorite item on the menu and why?

Careth: My current favorite is probably our most recent addition back on our menu: our Tempeh Reuben Sandwich. I just love the red cabbage sauerkraut that we’re making in house. It’s really great and tangy! I never liked Reubens with meat, so this is actually my favorite version of a Reuben that I’ve ever had! 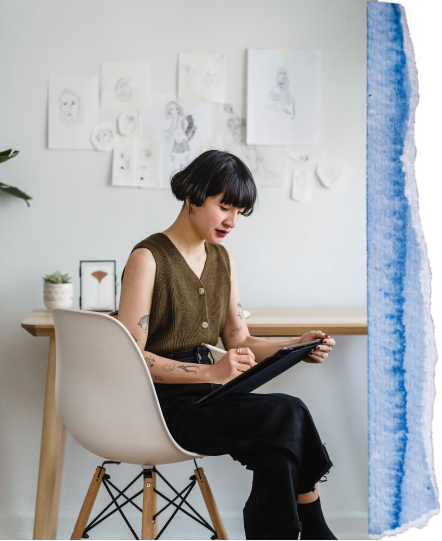