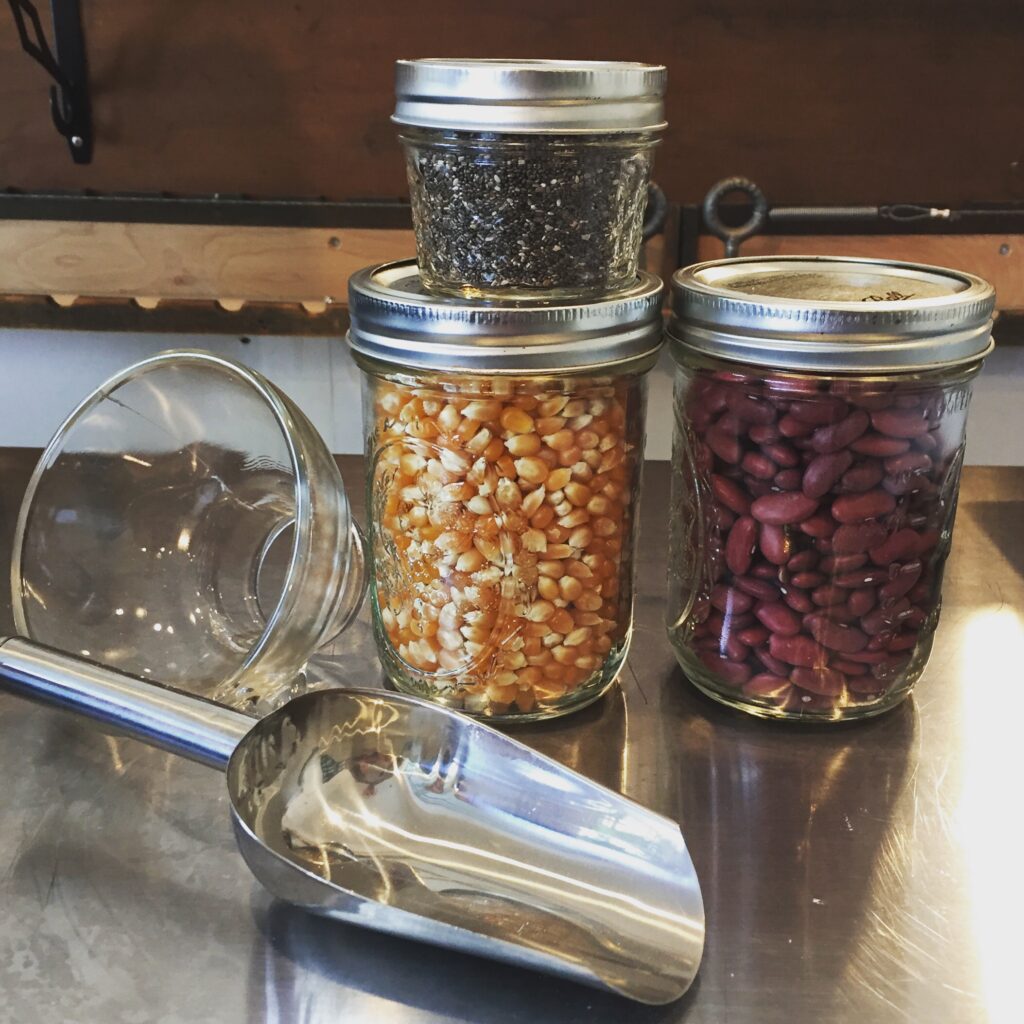 A Conversation with a Zero Waste Grocery Store: Scoop Marketplace

Scoop Marketplace is a zero waste grocery store located in the Capitol Hill neighborhood of Seattle. You can bring your own containers to purchase bulk dry foods, herbs, spices, personal care products, and household products.

In this conversation with the owner, Stephanie Lentz, we learn about how she decides which products she sells, her personal definition of sustainability, and what’s coming next for Scoop. 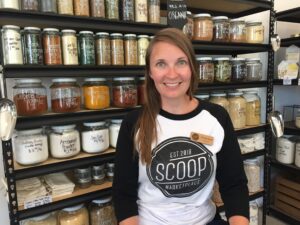 Can you tell me a little bit about yourself and why you decided to start Scoop Marketplace?

Stephanie: I am a wife and a mom. I have an almost five year old and a two year old and they’re my favorite. We made some pretty significant life changes a few years ago shortly after my son was born. It started with documentaries, of course, as all major life changes do these days. We started with diet-related ones and I started focusing on a plant-based diet.

That journey of changing how we were eating and being really intentional about food led me to this really frustrating realization that even by shopping from local farmers and buying food that had been grown organically, I couldn’t avoid the toxins that were already in our soil, our water, and our air. The fact that it was inescapable, because of plastic pollution and other things that are dumped into the earth, was really stressful. It caused a lot of anxiety for me and if I’m feeling anxious, the first thing I want to do is figure out what I can control. What I discovered was I had no idea how to fix the problem, but I could stop contributing to the problem. That was how we started down this path of zero waste living. I’m not sure we knew “zero waste” was such a buzzword at the time, but we just started reducing our waste a little bit at a time. I wanted to do it all overnight but was a) incapable of doing so and b) quickly realized that was not sustainable for my husband or my family.

After we had significantly reduced the waste that we were creating about a year or two into the process, I still felt like grocery shopping was really difficult. I would feel really awkward and uncomfortable taking my own containers to the store or sometimes the cashier people get annoyed with me. I was following some European zero waste shops on Instagram at the time and I just thought it was so weird that there wasn’t already something like that in Seattle. It seemed so Seattle to me. My husband literally asked me, “So, does that mean you need to open one?” and I said, “Yeah, I guess it does.” So, I did!

At the time that I decided to do it, our son was two and a half, and our daughter was about four months old. So, it was a slow process getting started and I was pretty hard on myself. I felt like I should be moving more quickly, but there was just a lot going on. It took about 18 months to finally open the brick and mortar shop.

“What I discovered was, I had no idea how to fix the problem but I could stop contributing to the problem.”

Can you tell me a little bit about how you decide which products make it into your store?

Stephanie: I definitely prioritize things that are as natural as possible with a few simple natural ingredients. I generally look for organically grown items. They don’t have to be organic certified because I want to support people who are doing it right and running ethical businesses, but maybe can’t afford the rigorous certification process. I also like to work with local small businesses, whenever possible.

I want Scoop to be a platform where I can highlight local makers and creators and people who are putting their creative energy into making something awesome that’s going to benefit and add value to our community, our customers’ lives, and also have a positive impact on the environment.

For example, I’m working with Dez who owns Billette’s Baubles. She reached out to me about carrying her cloth menstrual pads and I was so excited. They are beautiful and I love that she’s a local mom that she taught herself how to do this. I asked her if she would be willing to use organic materials for the pads that she made for Scoop and she was all in! She offered to find the materials online together and create a product that works for Scoop and for our customers.

That’s the other cool thing about being a small business and being really involved in the community. We can brainstorm different ways to bring the best products to the community that truly adds value to their lives. 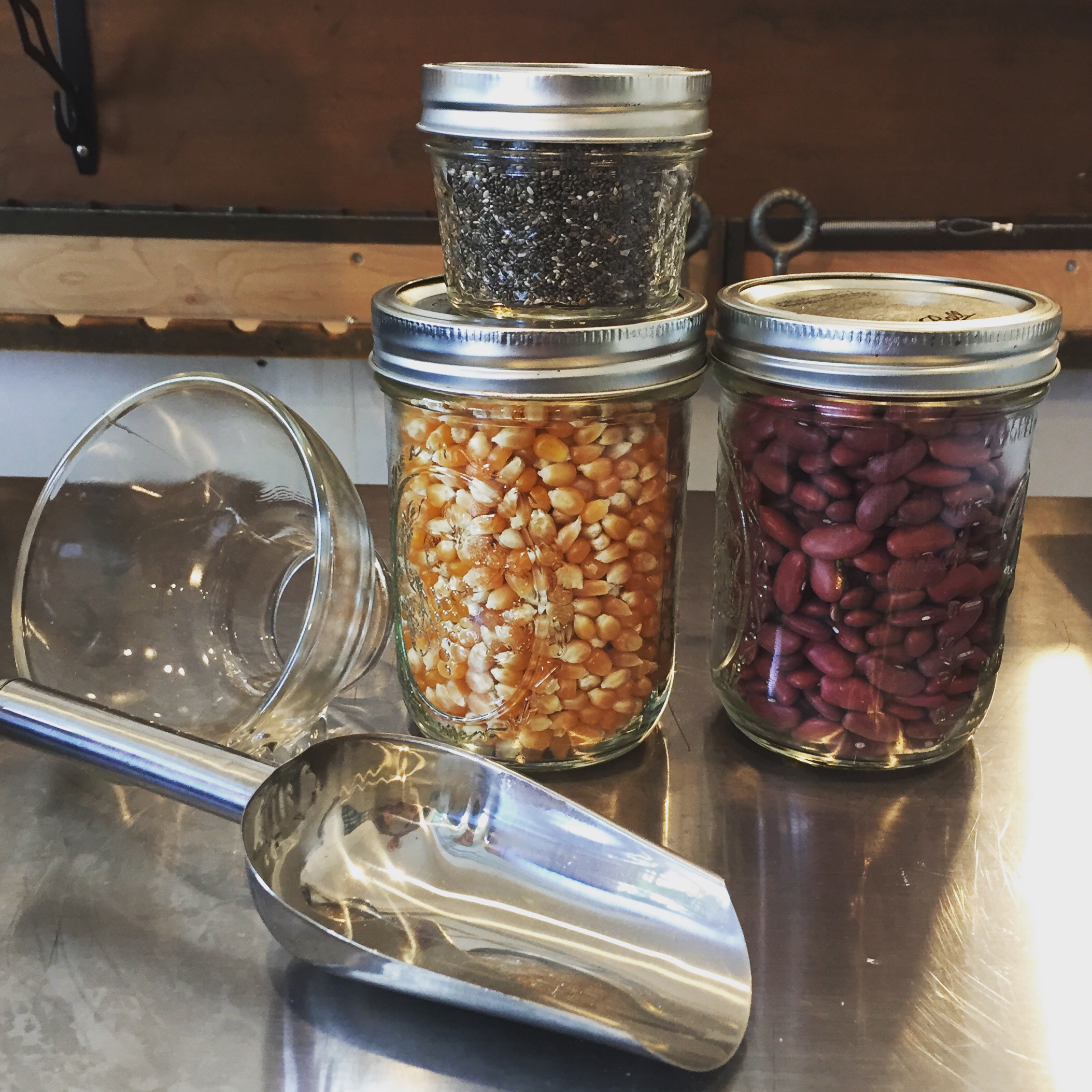 What would you say is the product you buy the most from your own store and why?

Stephanie: Oats! I am always out of oats. I was recently thinking that I should just bring one of those 50 pound bags home with me one of these days. I definitely purchase oats the most from the store because that is what my family, particularly my kids, like to eat. We do a lot of oatmeal and a lot of granola. We use oats to make energy bites and chickpea balls. It just feels like we need more all the time. 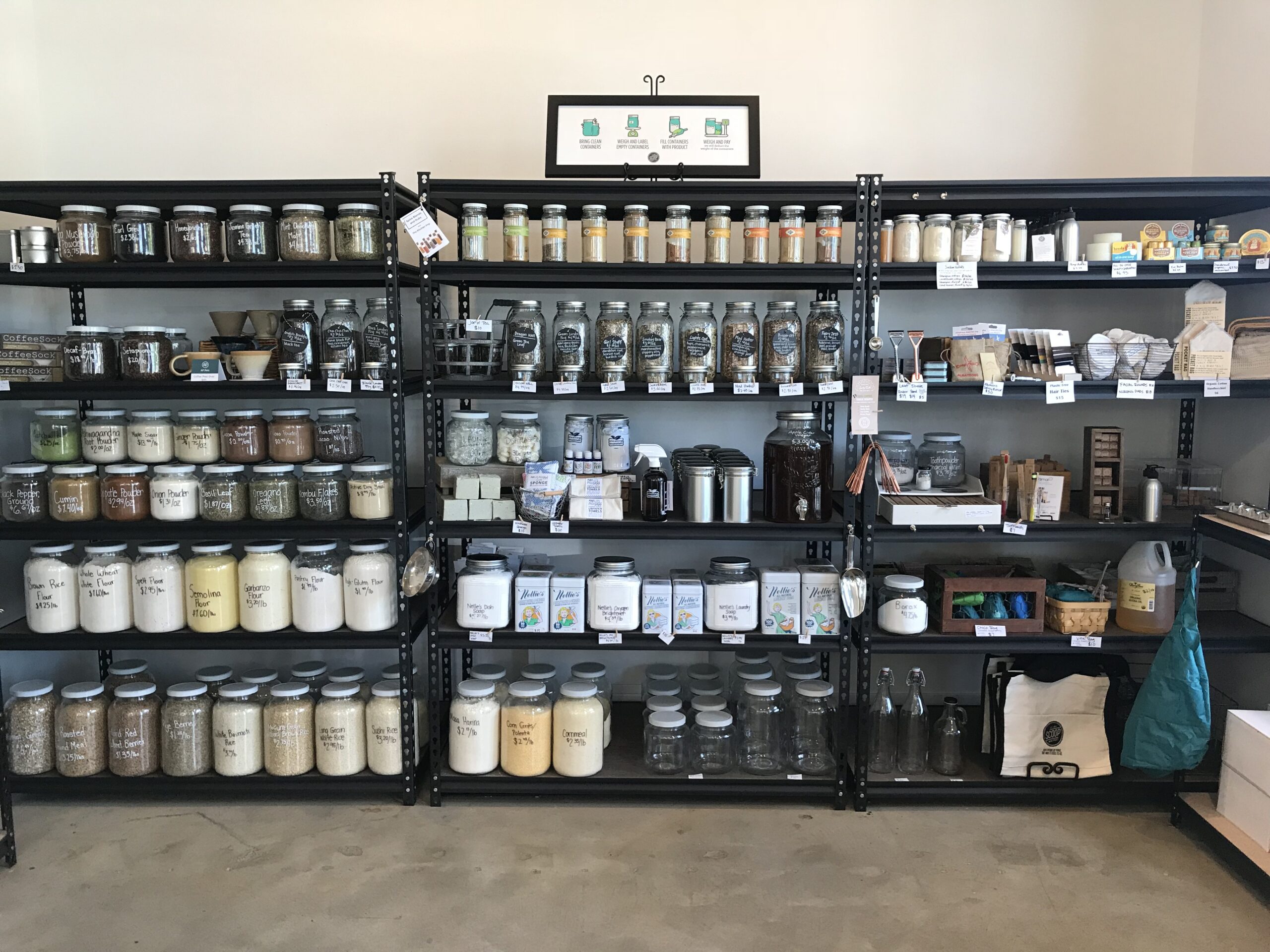 What advice do you have for other small business owners who might not be sure if making sustainability a core part of their business is worthwhile or profitable?

Stephanie: It’s a difficult question and it’s interesting that you mentioned profitability. What I would say to that is to really sit with the word and the concept of the sustainability. Really determine what that means for you as an individual and then take it a step further. What does that mean for your family or your immediate communities? What does it mean for you from a global perspective? Determine if that is something that you value and if it falls into your priorities because if it’s a top priority or value, I feel like it simply can’t be compromised.

One thing that I hear people saying about me regularly which I am starting to recognize and believe is that I always choose to live in alignment with my values. Even if it’s inconvenient and even if it’s not as profitable. It’s just a non-negotiable because that’s the only reason that I’m doing the business. If the business isn’t serving that greater purpose of sustainability, and I mean that in a holistic way, as far as sustainability for the planet but also supporting sustainable lifestyle for the community, me, and my family. Ask yourself: can this business run in a way that allows me to still be a healthy being? Because I’m not willing to run a sustainability-focused business that is leading me to burnout. That’s not sustainable and that’s not modeling a healthy lifestyle for other entrepreneurs, and particularly moms around me.

“Can this business run in a way that allows me to still be a healthy being? Because I’m not willing to run a sustainability-focused business that is leading me to burnout.”

When did you officially launch your brick and mortar in Capitol Hill?

Stephanie: The brick and mortar store opened on Earth Day this year, so April 22nd. I opened it by myself and it was pretty crazy.

I don’t tend to be the type of person who is willing to put something out into the world that isn’t complete. I had the opportunity to start small in this space and I literally just opened it with the stuff that was in my garage from the pop-ups that I had done. I had folding tables and my shelving was collapsible shelving so that it was portable to take with me to the pop-up shops. I feel like saying it was a glorified pop-up is even generous. I was so worried that people at the soft launch celebration would be seriously underwhelmed and never come back.

But I just did it, and you know, my family has always been top priority. Since I was doing it by myself, I would open for maybe three evenings a week. All I did was post on social media and say, “Hey, the store’s going to be open from four to seven today” and people would come. It was really exciting and then about a month into it, I hired the team and we were open seven days a week. 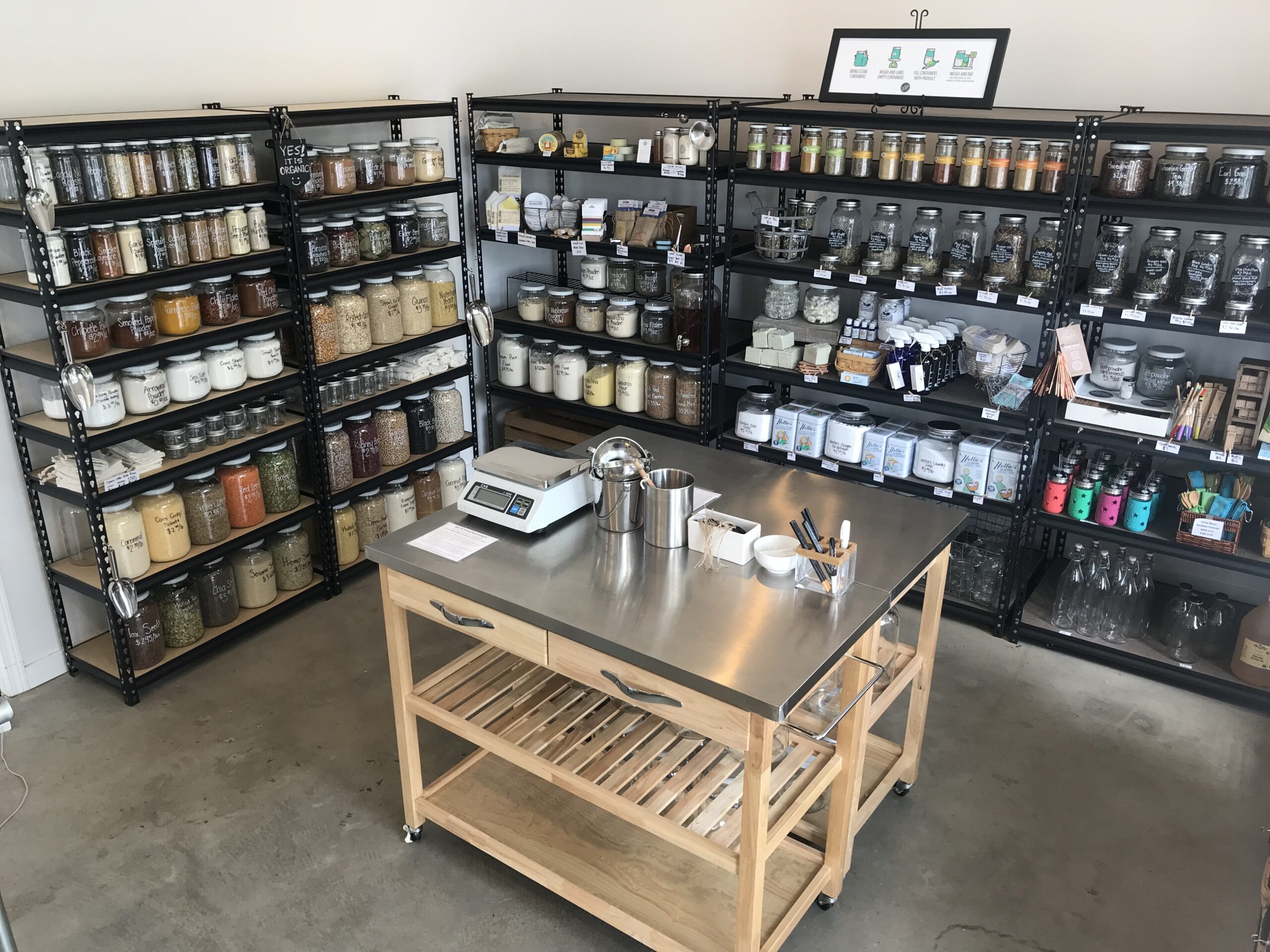 What’s coming up next for Scoop?

Stephanie: We’re currently preparing a workshop and community event schedule that we’ll be launching this fall. We’re continuing to build out our website as a resource for our customers so if they have any questions about where our products come from or how to use them, they can go straight there and get all kinds of information. We’re also in the very early stages of planning for our second location which is currently planned to open in 2020.

[Interview edited for brevity and clarity. All photos courtesy of Scoop Marketplace.] 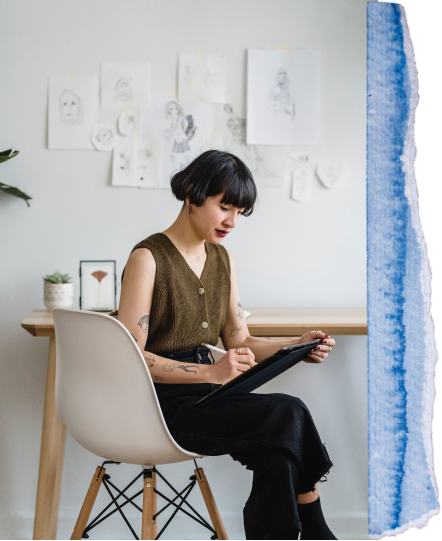